United States of America forgot that American interests have been on actually in the continuity of the established system, deviating from liberal internationalism which is in the identity code of the state, during the presidency of Donald Trump that improving the discourse “America First” in global relations.

Passive policy that has been starting in presidential term of Barrack Obama, continued steadily in term of Donald Trump and it has destabilized the USA’s mobility in the Eastern Mediterranean also by limiting. Power gap what is formed in this way was being tried to fill with different initiatives. Regional actors and also former rival Russia, old friend Europe and new rival China tried to fill this power gap that is in the Eastern Mediterranean. The possibility of this power transfer evolved to repairing image in during the US presidential election and making new policy with Joe Biden elected president.

A number of important actors who are hopes to benefit from the Mediterranean natural gas reserves for instance South Cyprus, Egypt, Greece, Israel, Italy, Jordan and also Palestinian Authority met to set up Eastern Mediterranean Gas Forum with hoping to fill the power gap in favor, in Cairo in January 2019. France requested to join the forum in later and USA applied to being permanent observer in end. Today as yesterday, the importance of the project includes strategy beyond energy supply for US. USA who is aiming to get rid of addiction to Russian Gas and Strait of Hormuz in Europe’s energy supplying, can expand their control on energy in Europe by deactivate Anatolian and Turks Straits also with building an LNG plant in Dedeağaç/Greece.

Quest for new balance that is trying to establish in the region, pushed many states including South Cyprus, Egypt and Greece to seek ways to improve Political and military cooperation with USA. Eastern Mediterranean Security and Energy Partnership Act that is enacted in December in 2019, did just that. This act that is supplying to establish an USA- Eastern Mediterranean Energy Center to facilitate cooperation among USA and Israel, Greece and South Cyprus, therewithal approved to Foreign Military Financing for Greece and International Military Education and Training (IMET) for Greece and South Cyprus. After that, American Authority attempted to a number of security and defence cooperation and in the island, establisment of air and naval bases came to the fore. Evoluation of British Sovereign Bases in this process, the permanence of the US existence came into question. And also in October in 2019 US Authority, signed with Greece, a new defence cooperation act that is will strengthen US and NATO forces’ abilities. In this context, foresee expansion of the Souda Bay naval base in Crete as the main port that is capable of taking aircraft carriers of US in Mediterranean. Against this, in Dedeağaç, new air and naval bases that is will supply to replenish to Bulgaria and Romania by passing Turks straits, was started to construction. Additionaly, construction of a drone base and helicopter training facilities in Greece, was decided.

US who is brought 20.000 soldier to Europe with Defender Europe 2019 practice, hoped to both contribute to the repair of Transatlantic Relations and to prevent Russia’s idea of regional penetrate. In its 2021 practice, where it takes this step further that is one of the reasons for Russian’s aggressives policies what is including Eastern Mediterranean, created perception of risk for Turkey as well as Russia with its emphasis on the Balkans. Practice region what was expanded thus for consantrate on South Flank of European alliance that is a strategic move developed as a beneficial achievement in 2020. New situation what is created by US policy of balancing the region with Greece for strictly prevent Russian’s penetrate in Eastern Meditarrenean, a separate topic of discussion what is how will it effect to Turkish- American relations that is on unstable ground. Problem looks like will be more complex than the its expects for US who is hopes to bypassing the problem of Eastern Mediterranean by trusting to European allies. For, parties to the issue and others with a conflict of interest who is US connected allies  both with NATO and bilateral relations…

Security gap what is created in Libya where is other problem zone in the region, enabled Turkey, Russia and some other countries to active policy making. US was not very active in Libya which was not stabilized after Gaddafi who is overthrowed by NATO intervention led by the Obama administration and it left the this problem zone to ıts European allies. But here, besides the concerns of members of the US Congress, in addition to prevalence of terrorist groups and already announced fact of migration flows, that is be active of many states in the complex power dynamics between groups and militias competing for superiority in Libyan territory, caused to sharpening of the situation for US. US administration did not approach to resolve for this multilateral tension that is created the ground fort he cracking of undesirable alliances. Furthermore, the fact that the power approaching to solve the problem in Libya can penetrate a wide area as far as the Sahara is an important reason for solutionlessness.

The active role of European countries, especially France, in the Eastern Mediterranean tension seems to have other benefits for the alliance in terms of the American administration. Not to approach the solution of the problem the states which is existance in the region for reason such as national strategies and European Security, shows global security factor in regional security and gives the image of the confirming US existance.

China who is new rival of US, seems Eastern Mediterranean like an area that is both suitable port area and will deepening of relations by developing for Belt and Road Initiative , the new globalization move in its focus. This economic penetrate continues rapidly and contrary to regional and global policies of the USA. The only thing that the US administration can do is to make moves that will stop China from gaining ports and friends in the region. The most important port of Israel who is its deepest ally in the region, is under Chinese rule shows that it has not been very successful in this regard.

When we look at it in general, we can see the US administration still has not shown its capacity in the Eastern Mediterranean and the USA expects the continuation of the problems with the controlled depression. Lost position in the region with passive policies tried to substitute not only with politics, but also with economic and strategic moves. Especially, in this process that is discussed of American-oriented globalization and began to materialize of some new Euro-centric discourses and ideas in Transatlantic Relations and questioned of the spirit of alliance, the problems which are not resolved between the allies in the region and that the rivals often create opportunities for themselves in policy development does not seem positive for American global politics. Actually former US Secretary of State Mike Pompeo’s discourse that is “The escalation of military tension is helping no one but the adversaries who want to see the transatlantic union crack” shows that the situation is understood by Washington.

This “Analysis” article was published in the March 2021 issue of C4Defence magazine. 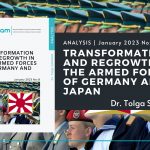