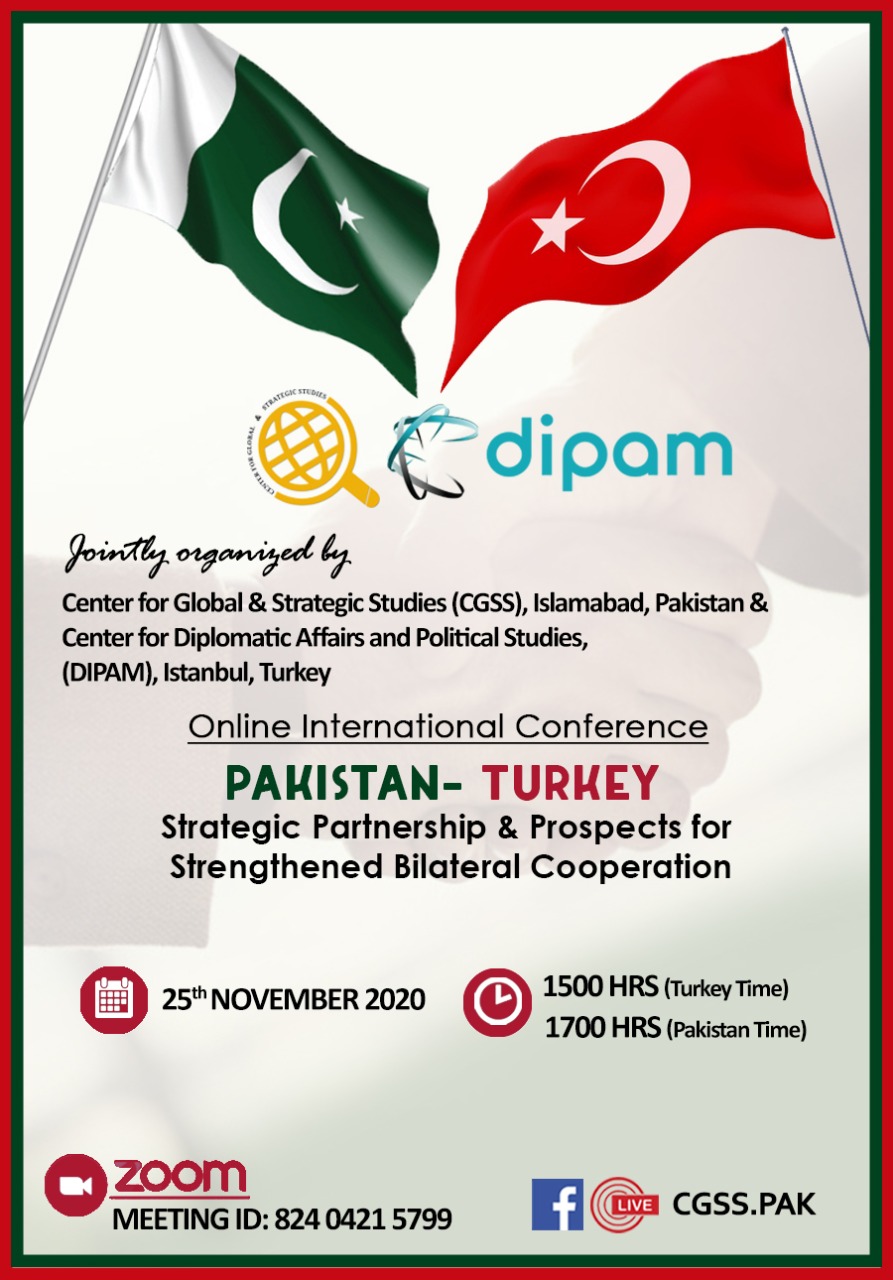 Pakistan and Turkey enjoy close and cordial relations. Turkey established diplomatic relations soon after Pakistan’s independence in 1947, and bilateral relations became very close due to strong cultural, religious and geopolitical ties. Pakistan’s father of the nation, Muhammad Ali Jinnah, expressed admiration for Turkey’s national leader Mustafa Kemal Atatürk and expressed a desire to develop Pakistan on the Turkish model of modernism. The cultural and historical commonalties have been reinforced by the firm determination of the current leadership of the two countries to strengthen mutual cooperation in all fields. Strategic partnerships constitute a significant feature of the evolving international relations system and are central to enhancing mutual ties among the states. Both, Pakistan and Turkey have great potential for enhancing cooperation in the spheres of trade, tourism, academic exchange, defense and so forth. Both the countries have enhanced their economic partnership in various fields including trade and investment, energy sector, tourism, culture and education. Turkish-Pakistani solidarity has been strong for decades, and both countries have supported each other on national issues as well as problems with their respective neighbors. Turkey, in the recent times, has recently taken steps to more definitively assert its support for the Kashmiri struggle for self-determination. Similarly, Pakistan supports Turkey in its conflict with the Kurdistan Workers’ Party (PKK) Terrorist Organization and support Turkey’s efforts to address the threat posed by Fethullah Gulen Terrorist Organization (FETO). The geo-strategic significance of both Pakistan and Turkey is quite unique in many ways. Turkey’s central location at the crossroads of the Balkans, the Caucasus, the Persian Gulf and the Middle East, where as Pakistan placed at the crossroads of Central Asia, West Asia and South Asia enables them to play a vital role in their respective regions, specifically in view of the rapid developments in the contemporary international relations. Moreover, Turkey’s new consulate under construction in Karachi, is said to be Turkey’s largest consulate anywhere in the world, symbolizing the importance of Turkish–Pakistani ties. This indicates the mutual desire of both countries to boost bilateral cooperation and bring a new dimension to geopolitics in Asia.

For this purpose, Center for Global and Strategic Studies in collaboration with the Center for Diplomatic Affairs and Political Studies in Turkey, plans to organize an online conference on the topic, “Pakistan – Turkey Strategic Partnership and Prospects for Strengthened Bilateral Cooperation”.

For this purpose, DİPAM,  in collaboration with the Center for Global and Strategic Studies (CGSS) in Pakistan, plans to organize an online Panel on the topic, “Pakistan – Turkey Strategic Partnership and Prospects for Strengthened Bilateral Cooperation”.