A Biden Presidency is A Risky Bet For US-Turkey Ties

When all of the votes from tomorrow’s US presidential election have been counted, either Donald Trump will be poised to start his second term or Joe Biden, the former vice president and senator from Delaware, his first.

A second Trump term would result in additional unpredictability and occasional chaos for the US-Turkey relationship, although the last two years his close personal relationship with President Erdogan has produced more satisfying results than during the first two. In contrast, a Biden White House, while somewhat easier to gauge, is ultimately more concerning for those hoping for fewer missteps and ultimately stronger bilateral ties.

Regardless of who emerges triumphant, it’s evident that Ankara’s standing in Washington of late has reached depths not seen in generations, due to an array of significant policy differences and public relations bungling. Additionally, Erdogan has spent the past several years focused on his interactions with Presidents Obama and Trump while his deputies have devoted comparatively little time to Congress, which has contributed to a hardening of the widespread anti-Turkish sentiment among both Democrats and Republicans. For example, when a year ago the House of Representatives once more took up an Armenian genocide resolution, this time not only was a vote permitted, the measure passed overwhelmingly, 403-16.

It’s against this troubled backdrop that a Biden presidency would commence. And while the view from the Oval Office may be very different from the campaign trail, everyone in Washington knows that the no. 1 priority of every first term administration is securing a second term. And during his professional career, Biden has compiled a strongly pro-Greek, pro-South Cyprus, pro-Armenian, and pro-Syrian Kurdish track record and Greek-American activists in particular have handsomely rewarded him for those actions. Meanwhile, Turkey is currently embroiled in tensions with Greece on Eastern Mediterranean maritime boundary issues, Armenia over the latest, and bloodiest, round of fighting against Turkey’s ally Azerbaijan, and Syrian Kurds affiliated with the YPG/PKK terrorist entities. In such a scenario, how confident should Turkish officials be that their concerns would be given the attention that is deserved?

To be clear, Biden has considerable foreign policy experience. Elected to the Senate in 1972, he was a longtime member of the Foreign Relations Committee, and served multiple stints as the panel’s chairman. He has visited Turkey numerous times, both while in Congress and as Vice President, and has met with Erdogan on several occasions.

His campaign talks a good game about the importance of smart diplomacy in the Eastern Mediterranean. Earlier this month, advisor Michael Carpenter reportedly predicted on a Hellenic American Leadership Council podcast that Cyprus peacemaking would be an early foreign policy agenda item.

But while there is constant chatter of multilateralism, namely the need to work closely with our allies and listen assiduously to all sides of a dispute, domestic political support will always be a factor, and often take priority, in overall decision making.

Biden hasn’t shied away from the use of bellicose language against Turkey. In mid-October, he called Turkey’s support of Azerbaijan in its conflict with Armenia “irresponsible.” Back in 2014, while vice president, he apologized for falsely claiming that Turkey had backed jihadists in Syria and then allowed them to enter Turkey. Last year, he warned that Turkey must “pay a heavy price” for its military actions against the YPG/PKK inside Syria.

The most incendiary comments he uttered, however, were spoken in December to the New York Times editorial board, where he described Erdogan as an “autocrat” and implied that the United States should support political opposition leaders.

Erdogan who, like Trump, is known for holding lasting grudges, didn’t take kindly to this personal and public slight, telling journalists after a cabinet meeting, “We had a friendship. We had conversations. We had drunk tea together. How can you use such an expression for us?”

The reaction from all corners inside Turkey, including the opposition movements Biden would presumably attempt to help, was equally negative. Over many years, Turks of various educational backgrounds and from all parts of the political spectrum have been teased for articulating wild theories claiming that the Central Intelligence Agency or another arm of the US government was regularly plotting to weaken or even dismember Turkey, much as Western governments did after the First World War. With these remarks, Biden managed to further convince many citizens, already spooked by the Obama-Biden administration’s refusing to help Turkey and Gulf countries overthrow Assad, arming of the YPG/PPK, and tepid response to the failed coup d’etat in July 2016, that America was no longer a strategic partner.

It’s reasonable to conclude that a Biden administration, if interested, would be required to work overtime during its first year to regain even a modest level of trust among Turks. With both a Congress looking for every opportunity to turn up the heat against Ankara and many campaign donors expecting him to follow through on assurances that he would talk tough on Turkey, such a prospect seems rather unlikely.

For those in Turkey seeking to improve the bilateral relationship, another four years of Trump looks to be the safer wager. 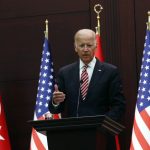 A Biden Presidency is A Risky Bet For US-Turkey Ties

When all of the votes from tomorrow’s US presidential election have been counted, either Donald ...
Daha Fazlasını Oku