Eastern Mediterranean is located in a central position relative to the Asian, European and African continents; It is a very important intersection point of world trade, providing the transportation of energy resources of the Middle East, Caucasus and Central Asia to Europe, controlling the energy transportation lines and together with the entire Mediterranean Geography. The Eastern Mediterranean refers to the region to the east of the line drawn between Cape Bon in Tunisia and Cape Liliebo at the western end of Sicily Island in Italy, and is named within these borders. Italy is a country with an important geopolitical position extending all the way to the Mediterranean, at the very south of the European continent and in the middle of the central sea of the world. The islands of Sicily and Sardinia, which complete the Italian boot, are located within the borders of this country. Tunisia is a country located in the Maghreb region of North Africa. It is bordered by Algeria to the west and southwest, Libya to the southeast, and the Mediterranean Sea to the north and east, and is separated from the European continent by the Strait of Sicily.

The necessity of making a fair distribution by taking into account the region where the jurisdictions will be divided, the relevant lengths of the coast, the locations of the islands and many similar factors is included in international law. Examples can be multiplied, as in the case of the various islands between Qatar and Bahrain. In this case, Qatar applied to the ICJ and requested that the problems of sovereignty of the Hawar Islands, Dibal and Qit’at Jaradah shallows between Bahrain and the delimitation of maritime areas between the two states be resolved. With the decision of the ICJ in 2001; It ruled that the Zubarah, Janan, Hadd Janan and Dibal Islands belong to Qatar, while the Hawar Islands and Qit’at Jaradah Island are under the sovereignty of Bahrain. The effect of the geographical location of an island on the sea areas that the island will have, especially during the delimitation of the continental shelf, the proximity of the islands to the mainland of the country or to the neighboring country is considered one of the very basic elements in international court decisions. If an island is located close to the mainland of the neighboring state, that island is either given a narrow continental shelf area or decided to confine it to territorial waters alone. 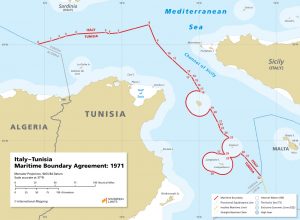 An agreement was established between Italy and Tunisia in 1971 to define the continental shelf boundaries. This treaty was based on the delimitation between the Tunisian mainland and the Italian island of Sicily. Italy has made delimitation agreements with other states covering three of the four straits with which it is a riparian, and the agreement with Tunisia is one of them. The text of the treaty lays out a complex border in the Strait of Sicily, representing an equidistant line between Pantelleria and the Pelagie Islands, Sicily and Tunisia. The Italy-Tunisia Treaty created a 12-mile half-arc around the Italian islands of Lampione, Lampedusa, and Pantelleria on the Tunisian side. According to the treaty, the two countries agreed that the Italian islands of Pantelleria, Linosa, Lampedusa and Lampione, all located near the Tunisian mainland, constitute a special case. The island of Lampedusa is the largest of the three islets of the Pelagie Islands and is part of the Sicily region. Linosa island is another of the Pelagie islands located in the Mediterranean Sea between Malta and Tunisia, to the north-northeast of Lampedusa Island. The island of Lampione is a small rocky island located in the Mediterranean Sea, adjacent to Lampedusa and Linosa in the Sicily region of Italy. The Italian islands of Pantelleria, Linosa, Lampione and Lampedusa have been given 13 miles of sea area. 12 miles wide are the territorial waters of these islands and are left with only a 1-mile-wide continental shelf and exclusive economic zone area. A 12-mile territorial sea strip has been left on the uninhabited island of Lampione. Limited effect was given to the Italian islands of Pantelleria, Linosa, Lampione and Lampedusa, which are much smaller in volume, around the equidistant line between Tunisia and Sicily. We can give an example of the continental shelf problem between Italy and Tunisia, covering the islands of Linosa, Lampedusa and Pantelleria, within this framework.

Various agreements have been made between many states in the Eastern Mediterranean to determine maritime jurisdiction areas. The impact of international agreements on the delimitation of maritime jurisdictions and the settlement of disputes is very important. The maritime jurisdiction areas that constitute the international maritime area are the continental shelf and the exclusive economic zone (EEZ). It is seen that states in the Eastern Mediterranean prefer to declare their EEZ unilaterally and make bilateral agreements rather than making agreements with all riparians. When starting the delimitation process, international courts first determine a demarcation line between the two mainland countries that reflects the geographical characteristics of the mainland countries. It may be unfair to give full effect to islands located equidistant from the mainland coast. However, in the examples where the islands were given full effect, the sea areas left on the opposite side were still of a significant size and therefore the solution did not lose its equitable quality.