Wars had brought death, illness, pain and grief during the history of humanity. These negativities brought by the war also revealed the need for law of war, and within this framework, the basis of the law of war was formed. Although this basis had not been formed unwritten in the first place, it reached the contract format in the process. Especially, the great human drama created by the Second World War revealed the necessity of a new and more inclusive agreement. Eventually, the conference, which was organized in Geneva in 1949, has a great importance. The Geneva Convention, signed in 1949, consists of 4 separate contracts. However, it should not be forgotten that although these 4 contracts contain common substances, they touch different points in terms of their contents.

When we take a look at the common articles of the Geneva Conventions; Article 2 sets out the applicability criteria of the contracts (Yamaner&Öktem&Kurtdarcan&Uzun, s. 1-2-3). According to this Article; “In any armed dispute that will arise between two or more of the high-contracting parties, apart from the provisions to be enacted in peacetime, the agreement will be implemented even if the war situation has not been accepted by either party.” “If part of the territory of one of the contracting parties is under occupation, the agreement will be applied even if this occupation does not encounter any resistance.” “If either of the warring parties is not a party to these contracts, this contract will be implemented by the state party to the contract.”

Filling an important gap, Article 2 has a crucial role. Because this Article is important in terms of ensuring the validity of the law of war even when either party is not in the war. Thanks to this Article, we see that states do not comply with the contract and eliminate the search for a way out.

Although there is no universal conflict environment with the common Article 3, it has also brought responsibilities to the member states in cases of conflict occurring at the borders of any of the member states.

The contract is also essential as it contains substances for the protection of civilians. According to the 15th Article of the 1st contract, “Belligerents should always take the necessary measures so as to search for sick and injured people, to protect them against bad treatment, to search for the dead and to prevent them being robbed.” In addition, life safety of healthcare workers was also taken into consideration and impunity with the 1st Contract. In addition, the right of privacy, which was granted only to healthcare workers, was also granted to the health buildings and hospital ships with the 2nd Contract. When it comes to war, the situation of the prisoners takes place a very large place that cannot be ignored. In fact, it was an important step that negotiations were held with prisoners and decisions were taken with the 3rd Convention. It was decided not to disrespect the ranks of the officers and the captive soldiers of the rank were given the right to continue their duty in the military camps.

Civilians have always been the greater sufferer of wars. The custody of civilians, whose lives have changed due to the interests of the political powers, suffering, and had to deal with illness and death, was also a major issue at the conference. Although the right of privacy of people and respect for humanity are the basic principle of law, the recognition of the right of occupying states to detain civilians leaves a big question mark whether war and law should be considered with the same perspective. According to the Articles of the contract that embellish the detention decision with humane thoughts, people detained will be protected in a safe and war-free area. Therefore, all the responsibility of these people is left to the state that detained them. It would also be more appropriate to say that these states are actually protecting the strong and occupying states instead of protecting the civilian population by giving them the right to work for detainees for a fee. In this context, the strong side could not be fully controlled. Under the light of all this information, how much are the decisions and contracts made in Geneva implemented and implemented in reality?

National and international organizations and non-governmental organizations in war conditions can be observed painfully that such measures are neglected during the war, even if they agree with the validity of the law and the protection of civilians. Even if the law has brought solutions to peaceful pursuits, it will be difficult to say that the solutions are very beneficial in reality because humanitarian situations are never ignored. Thus, in addition to the law, universal and human values need to protect the world. 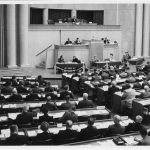 Wars had brought death, illness, pain and grief during the history of humanity. These negativities ...
Daha Fazlasını Oku